Give A Monetary Gift to International & Global Studies

On Thursday, October 28th, the International and Global Studies program will be hosting a talk by Professor Ravi Komarraju. The talk, titled "A View of India: Understanding A Complex Society And Its People," will be hosted via Zoom at 4 PM at this Zoom link, or by scanning the QR code on the flyer below: 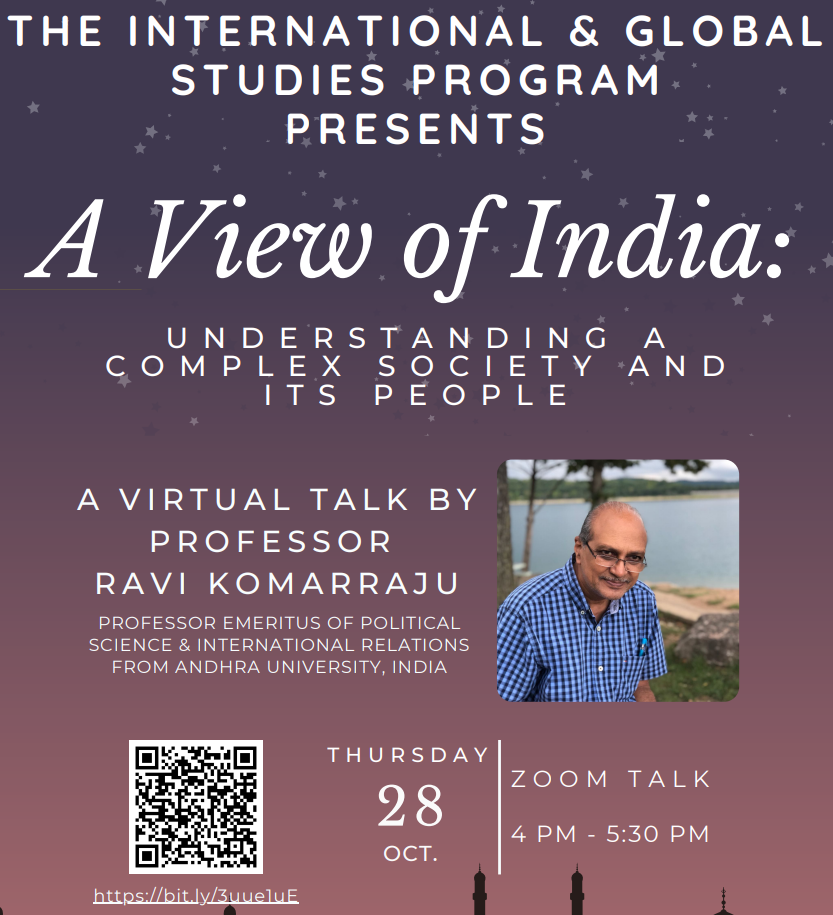 Cooper Gatewood has been selected for the JET (Japan Exchange and Teaching) Program beginning Fall 2011. While at the University of Arkansas, Cooper took the opportunity to study abroad on numerous occasions: in Buenos Aires, Argentina, during the summer of 2008; in Alicante, Spain, during the fall semester 2009; and in Pau, France, during the spring semester 2010.

During her senior year, Elizabeth Matthews Johnson interned at the Arkansas World Trade Center in Rogers.  After graduation she took a job an Admissions Counselor in the Office of Admissions at the U of A. Currently, Elizabeth is the Development Manager for the Walton College at the U of  A and is seeking a Master of Education in Higher Education Administration.

Michelle Murphy was a triple major in International Relations, European Studies and Anthropology, graduating in 2011.  She spent a year working as an AmeriCorps VISTA at the OMNI Center for Peace, Justice, and Ecology in Fayetteville, Arkansas.  This fall Michelle relocated to Washington, D.C. where she is currently enrolled at George Washington University working on a master’s degree in International Affairs with a concentration in Development.

Robin Terry spent her summer after graduation interning with the Clinton Foundation in Little Rock. This fall (2011), she will be attending George Washington University’s Elliott School of International Affairs in Washington DC, where she will earn a Master's degree in Global Communication and International Affairs. While attending GW, Robin will also be interning in the State Department’s Bureau of International Information Programs during the spring semester 2012 and hopes to intern in the Communications Department of the Environmental Protection Agency this fall.

Emily High has been teaching high school Spanish in the inner city of St. Louis, Missouri, as a Teach for America teacher. While pursuing her degree in International Relations, she held a State Department internship at the U.S. Consulate in Naples, Italy.

Spencer Lucker, a triple-major in International Relations, European Studies, and Spanish, has recently served as an intern with the Ombudsman and Communications Department in the office of Arkansas Governor Mike Beebe. This past summer (2011), Spencer has been part of the Village Life Outreach Project in Shirati, Tanzania, where he worked with the newly built Roche Health Center to develop a monitoring system for a nutrition project that provides lunches to 1,000 students in the Shirati area to enable them to attend school.

Kendall Byers graduated with honors in the summer of 2009.  He doubled majored in International Relations and Middle East Studies.  After graduation he joined a year-long humanitarian effort in Northern Iraq and learned Iraqi Kurdish while teaching prep English to MA students at a local university.  He has completed a CELTA (Cambridge Teaching Certificate) and in October 2012 joined a non-profit in New Delhi which is generating small businesses among the Indian Muslim minority.  He is serving a language school helping young entrepreneurs acquire local language.

Casey Clare worked for Senator Blanche Lincoln upon graduation until January 2011, at which time she moved to work as director of operations for The Alliance for Driver Safety and Security on Capital Hill. She has recently received a $30,000 Ambassadorial Scholarship from Rotary International, which she will use to enter a program on climate change and sustainable development in New Zealand beginning in 2012. While at the University of Arkansas, Casey studied abroad four times, in Viterbo, Italy; Puntarenas, Costa Rica; Pingtung, Taiwan; and Honduras.

Jessica Rice (double-major in International Relations and Spanish) served as an English language and culture teaching assistant in Jerez de la Fronterra, Spain. In the summer of 2011, Jessica moved to the Fundaican Cruzada Argentina in Buenos Aires, Argentina, where she is developing strategies for program evaluation and helping to establish guidelines for implementing the evaluation process for an educational initiative supporting high school students in some of the most impoverished regions of Argentina.

Melissa Tuttle, a double major in International Relations and Political Science, moved to Washington, D.C., upon graduation, where she worked for Congressman Vic Snyder of central Arkansas from September 2009 to September 2010. After leaving the Congressman’s office due to his impending retirement from the House of Representatives, Melissa moved to the House Armed Services Committee. She worked first as a staff assistant for the front office and then with the Oversight and Investigations Subcommittee, which was working in the 112th Congress on an investigative report on Guantanamo Bay detainee transfer policy and reengagement issues. Melissa is now an entering student at Vanderbilt Law School, class of 2014.

Cole Bockenfield triple-majored in International Relations, Political Science, and Middle East Studies. He is currently the Director of Advocacy for the Project on Middle East Democracy (POMED).  He has studied the Middle East for more than eight years with a focus on U.S. and Middle Eastern politics, history, and the Arabic language at the University of Arkansas, Georgetown University, and Al al-Bayt University in Mafraq, Jordan.  Prior to joining POMED, he worked for the International Foundation for Electoral Systems (IFES) on electoral assistance programs in Iraq, Lebanon, Morocco, and the West Bank and Gaza, including fieldwork in Beirut and Baghdad.  He also conducted research with the Center for Islam and Democracy (CSID) in Amman.  Cole has also been selected as a member of the American Middle East Network for Dialogue at Stanford (AMENDS) in 2012, Foreign Policy Institute's Future Leaders program in 2011, and in 2010 was selected as a fellow by the Fund for American Studies (TFAS). He has recently worked with the Society for International Development-Washington to re-launch the Middle East Workgroup, and is an active mentor to interns working in the field of foreign policy through TFAS.   His advocacy work with POMED over the past several months has played an invaluable role in the foreign policy debate since the beginning of the “Arab Spring.”  Representing POMED, Cole has been at the forefront of discussions with Congress, the State Department, and the White House as an important contributor to policymakers as they adjust to new realities in the region.

Nathan Brown double majored in International Relations and Middle East Studies.  In the fall of 2007 he studied abroad in Amman Jordan.  After graduation he joined the U.S. Marine Corps and attended Officer Candidate School in Quantico, VA.  Nathan was on active duty from 2008 to 2012 and served two deployments to Helmand Province, Afghanistan.  Currently he is a captain in the Individual Ready Reserves and a first year student in the Security Studies Program at Georgetown University.  Nathan’s goal is to continue working in Washington, D.C. after obtaining his Master of Arts Degree.

After graduating in December 2008 with a triple-major in International Relations, History, and European Studies, Erin Riley interned in the Public Programming Department of the Smithsonian Institution’s National Portrait Gallery in Washington, D.C. In the summer of 2009, she moved to Uki City, Kumamoto, Japan, to teach English through the JET (Japan Exchange and Teaching) Program, where she remained until the summer of 2011. She is currently at the University of Denver at the Josef Korbel School for International Studies where she is getting a Master of Arts degree in International Administration.

Nathan (Kent) Miller has been appointed an academic advisor in the Honors College at Appalachian State University, following his graduation from William & Mary Law School.

Hunter Riley is Director of Programs for the Pat Tillman Foundation, an organization that is continuing the legacy of Pat Tillman, a professional NFL football player killed in action after putting his career on hold to serve in the United States military in Afghanistan. Its mission is to invest in US veterans and their families through education and community. Hunter joined the Pat Tillman Foundation staff in February 2009. He had previously supported the foundation as a graduate student consultant starting in September 2008, before which he worked with several government and non-governmental organizations in Arkansas, Washington D.C., and Cameroon. A graduate of the University of Arkansas Clinton School of Public Service with a Master’s degree in Public Service, Hunter has spent countless weeks traveling through 30 countries on five different continents.