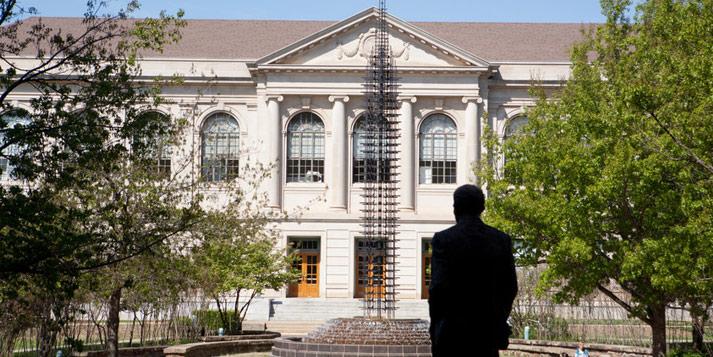 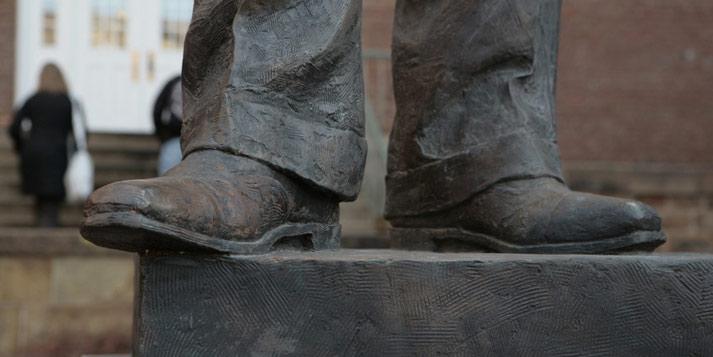 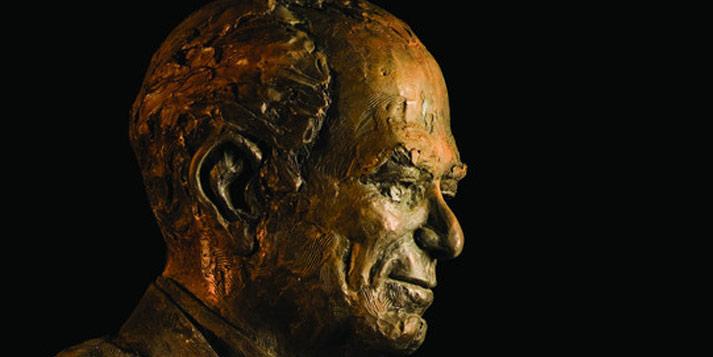 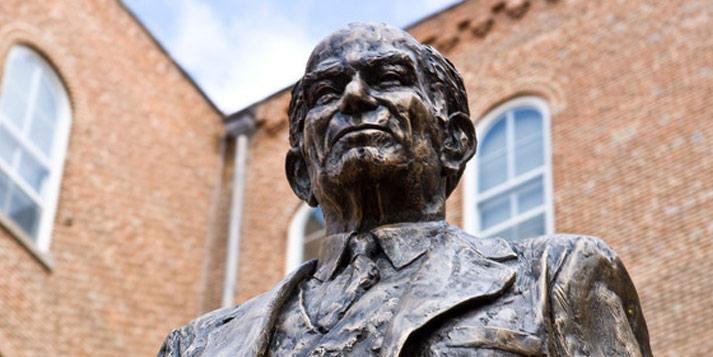 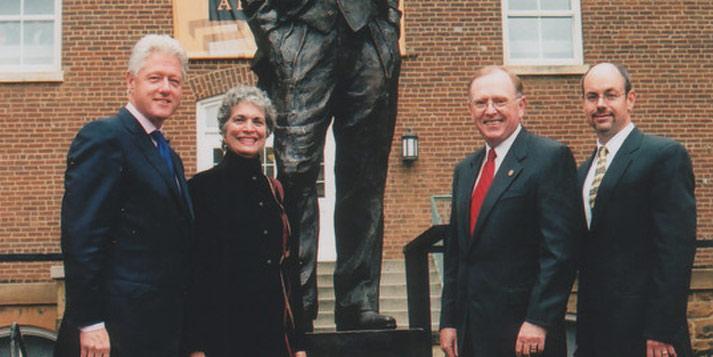 A detailed shot of the bottom of the statue. You can also see the entrance of Old Main.

Bader modeled the sculpture in clay, and the final bronze was cast at a foundry in New Jersey.

A View from Below

The statue was dedicated Oct. 21, 2002. Among the attendees were the sculpture, Gretta Bader, and former president Bill Clinton.

After an international search that produced more than 100 applicants, the University of Arkansas commissioned sculptor Gretta Bader to create a statue of J. William Fulbright to be displayed outside Old Main, facing the Fulbright Peace Fountain.

Bader modeled the sculpture in clay, and the final bronze was cast at a foundry in New Jersey. The completed work, standing 7-foot-3, was transported to the University and dedicated Oct. 21, 2002.

“I wanted students not to be intimidated by the man, not to see him as remote,” Bader said at the time of the dedication. “What I tried to do here was to capture the intensity, the accessibility and the physical liveliness of the Fulbright of the tumultuous ’60s.”

Former president William Jefferson Clinton, in his first visit to Fayetteville since leaving office, served as the main speaker at the dedication. Other speakers included Chancellor John White, poet Miller Williams, Fulbright College Dean Donald Bobbitt, and Harriet Fulbright, widow of the late senator. John McCloy and Bettina Adenauer, both descendants of the signers who established the Fulbright program in Germany, also participated in the dedication, which was part of a celebration honoring the 50th anniversary of the German-American Fulbright Educational Exchange Program.

Bader, a Washington portrait sculptor known for her ability to capture the likenesses of well-known figures in bronze, died Aug. 1, 2014. She was 83.  Her husband, William Bader, had studied abroad as a Fulbright scholar in the 1950s and later had served on the senator’s staff. Mrs. Bader, who met Fulbright in 1966, made a portrait bust of the senator that is in the collection of the National Portrait Gallery in Washington.

“One of the things I learned while doing the portrait bust,” Mrs. Bader told the alumni magazine of Pomona College in 2002, “is that Fulbright was a very intense listener and conversationalist. Talking to him gave his face an animation I wouldn’t have seen otherwise.”