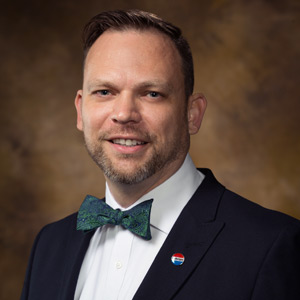 BJ grew up in Manila, Arkansas in the Northeast corner of the state. He married his wife, Melissa, in 1997 and then enlisted in the Army.  He served for seven years, including time in South Korea and Iraq. After his service was finished, he earned his Bachelor’s of Business Administration from the University of Arkansas at Little Rock in 2006. Prior to joining the Fulbright College Advising Center, he spent three years in the Fulbright College Honors Program and five years in the Academic Affairs office at Arkansas State University at Beebe. He finished his Masters in Higher Education program in 2015.

Lifelong Razorback fans, BJ and Melissa made their dream move to Fayetteville in May of 2012. Melissa is the Director of Nursing for Brookstone Assisted Living in Fayetteville. They have 3 boys: Price, Peyton, and Parker. Their overcrowded house is also home to four very spoiled dogs. The family loves watching movies, hiking, and cheering for anything with a Razorback.