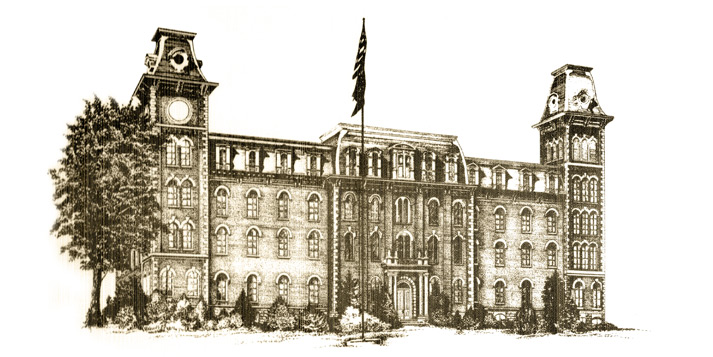 Old Main was the first permanent building to be erected on the Arkansas Industrial University campus. Its exterior was finished in 1875, just three years after the university opened for classes. It is the oldest building still standing on the campus and the only one built in the 19th century still standing.

Initially, it was simply referred to as “the University building,” but it was formally named University Hall in 1895. By the turn of the 20th century, the more sentimental name of Old Main had gained currency, and the University of Arkansas Board of Trustees officially changed the name to Old Main in 1991.

A firm at Helena, Arkansas, McKay and Helmle, was originally considered for designing a university hall, but trustees visited campuses in Illinois and Michigan, coming away set on having a main building like the one at Illinois Industrial University, designed by John Mills Van Osdel, a Chicago architect. Although the two buildings were nearly identical, the towers were swapped, with the taller bell tower to the right side of the building and the smaller clock tower moved to the left. Although the reason for the switch is unknown, two myths for why this switch occurred have attained:

Both of these stories appear to be legends. Don Schaeffer in his history of Old Main says the switch was made to make it easier for residents of downtown Fayetteville to see the clock tower, not that there was a clock to see. Because of expense, installation of a clockworks was put off.

The construction bid from Mayes and Oliver of Fayetteville was accepted, and Joseph Carter Corbin, the superintendent of public instruction for Arkansas and ex-officio president of the university board of trustees, signed the $123,885 contract for erection of University Hall. John McKay was made supervising architect, and two Fayetteville civic leaders, Lafayette Gregg and Stephen K. Stone, were added to the trustees’ building committee.

Materials for construction came mostly from local sources. Lumber was milled at Peter Van Winkle’s mill near the historic War Eagle Mill and hauled to Fayetteville by oxen. Bricks were made from clay deposits on the south side of Fayetteville and fired in the brickyard of John L. Kelton. Cut stone for the exterior trim came from northeast Washington and western Madison counties. And sandstone for the foundation and basement was quarried near the building.

Old Main’s architectural style is known as Second Empire, and its mansard roof is perhaps the most obvious expression of that style. The east portico, however, is a classical design and is immortalized in the official seal of the university.

The building has needed repairs almost since it was finished and has been remodeled almost as often as new academic programs were initiated at the university. By the early 1980s, though, the building was closed because of safety concerns. A fundraising campaign was launched to renovate the structure, and it was rededicated in 1991.

In 2005, a clock was finally installed as part of the culmination of the Campaign for the Twenty-First Century, ending a timeless tradition. Today, Old Main is home to the dean’s offices of the Fulbright College of Arts and Sciences as well as several academic departments. Giffels Auditorium, refurbished to its original look, is on the second floor.