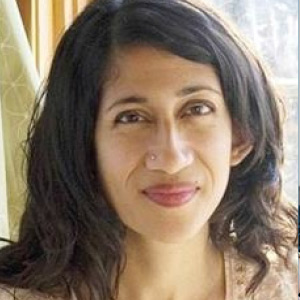 Department of English, Fulbright College of Arts and Sciences

Padma Viswanathan was named a finalist for the Scotiabank Giller Prize, one of Canada’s most prestigious literary awards. Honored for her novel, The Ever After of Ashwin Rao, Viswanathan joined a shortlist of six Canadian authors in the running for the prize.

Of Viswanathan’s novel, the prize jury wrote, “Scotch-drinking, McGill-educated psychologist Ashwin Rao wrote about those bereaved by India’s state-sponsored anti-Sikh pogrom of 1984. In 2004, he returns to Canada researching another book on comparative grief, attending the trial over the 1985 bombing of Air India 182, a bombing that claimed 329 lives, including his sister and her children. Guided by Viswanathan’s ever-compassionate gaze, and her ability to render a polyglot world in English, Ashwin meets Canadians affected by the tragedy, some as complex as himself. This often droll, fiercely-intelligent novel with its cat’s-cradle of a plot challenges the twin deadly lures of religious fundamentalism and racism, revealing the learning and unlearning at the core of the immigrant experience.”

Founded in 1994, the Scotiabank Giller Prize aims to recognize excellence in Canadian fiction. This year, it awarded $10,000 to each of the six finalists, and $100,000 to the ultimate winner, novelist Sean Michaels.