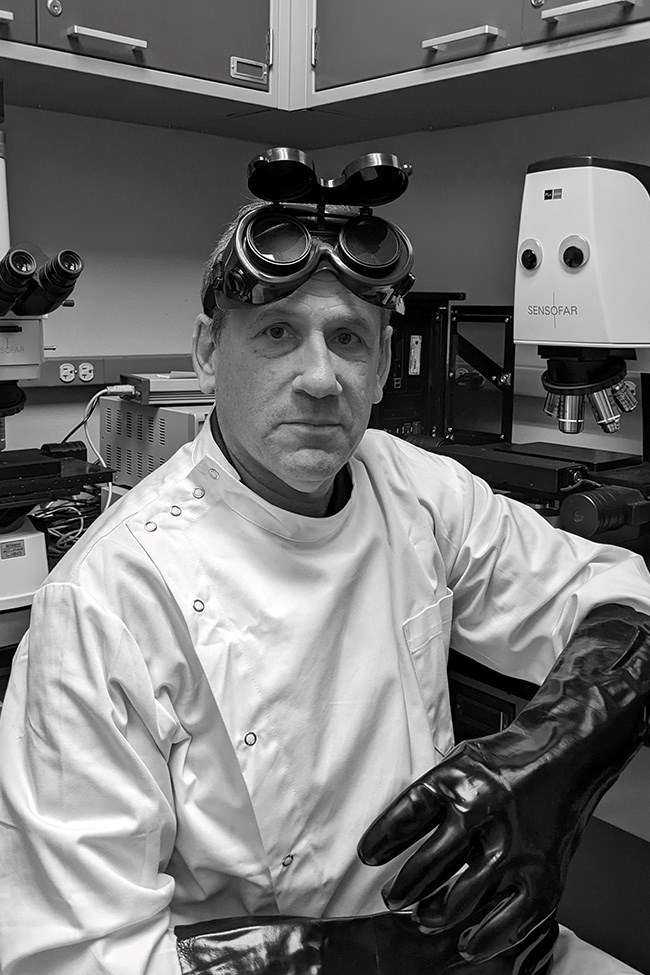 Dr. Ungar is most interested in the paleoecology of early hominins. This is the study of how our distant ancestors and their contemporary cousins made use of their environments to earn a living. His work integrates three fields of research:1) dental anthropology (especially the study of relationships between diet and the sizes, shapes and wear of teeth in living primates), 2) primate feeding ecology (the study of the diets and feeding adaptations of living primates), and 3) paleoanthropology (the study of fossil human ancestors and our close relatives).

His work on the sizes, shapes and wear on teeth involves using new technologies to better understand relationships between teeth and diet in living primates. This work focuses on the dental topographic analysis and dental microwear texture analysis. Dental topographic analysis involves the use of geographic information systems combined with laser scanning to demonstrate how teeth are adapted to wear in ways that keep them mechanically efficient for fracturing specific sorts of foods.

Dental microwear texture analysis, in contrast, involves the study of microscopic use-wear in teeth, and how different patterns relate to different diets. This approach involves the combination of white-light scanning confocal microscopy with scale-sensitive fractal analysis.

This work has, as its ultimate goal, the better understanding of the dietary adaptations and feeding behaviors of early hominins and other extinct primates. Dr. Ungar has studied original remains of many fossil species, from Neandertals and earlier members of our own genus, to earlier Pliocene forms from South Africa, Tanzania, Kenya and Ethiopia . He has also analzed Oliogocene, Miocene, and Plio-Pleistocene monkeys and apes from Europe and East Africa.  As a final note, his paleontological fieldwork experiences include participation in projects involving the search for evidence of Pleistocene humans in Botswana , Jordan and South Africa , and the excavation of fossil Miocene apes in Hungary, and Paleocene mammals in Montana. He has also contributed to GIS analyses of fossil hominin sites in South Africa.

Dr. Ungar’s research has been funded by extamural grants from the National Science Foundation, the LSB Leakey Foundation, the Sigma Xi Society, the Boise Fund, and the Andrew Mellon Foundation. He has written or coauthored more than 180 scientific works in various media, including the journals Science, Nature, and the Proceedings of the National Academy of Sciences.  His academic book, Mammal Teeth: Origin, Evolution, and Diversity, won the American Publishers (PROSE) award for best book in biological sciences, and his trade books, Teeth:  A Very Short Introduction, and Evolution’s Bite:  A Story of Teeth, Diet, and Human Origins are available on bookstore shelves and online.

Dr. Ungar advises undergraduates, MA and PhD students in the Department of Anthropology. He also advices PhD students in the interdisciplinary Environmental Dynamics Program. He teaches courses each year at all levels, including An Introduction to Biological Anthropology (ANTH 1013), Human Evolution (ANTH 3433), Primate Adaptations and Evolution (ANTH/BIOL 4613), and Human Evolutionary Anatomy (ANTH 5423).