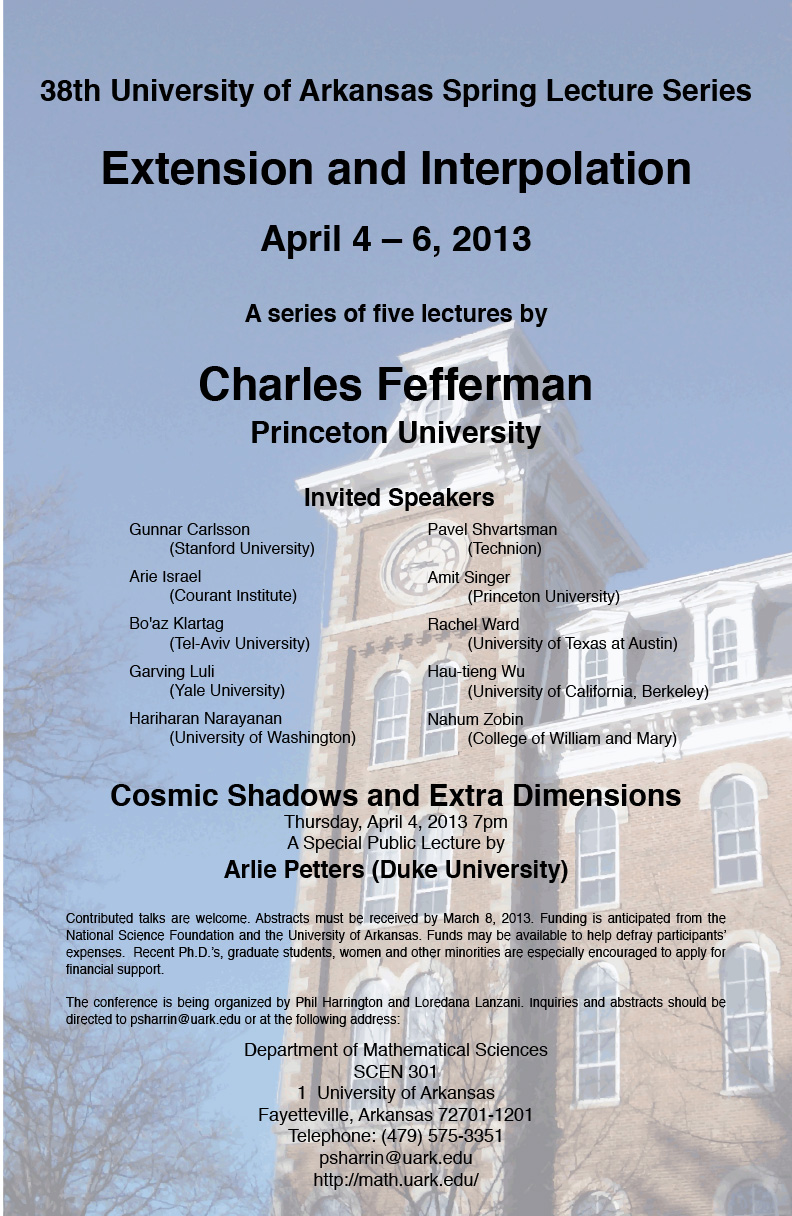 The University of Arkansas Spring Lecture series are conferences organized every spring by the Department of Mathematical Sciences of the University of Arkansas. Each conference is focused on a specific topic chosen among the current leading research areas in Mathematics; a principal lecturer delivers a short, five-lecture course and selects a number of specialists who are invited to give talks on subjects closely related to the topic of the conference. Short talks by young Ph.D.s and finishing graduate students are solicited to complement the conference. Each Lecture Series has grown into an ideal opportunity for specialists and young researchers to meet and exchange ideas about topics at the forefront of modern mathematics.

Murat Akman (University of Kentucky)
Title: Dimension of a certain measure in the plane
Abstract: In this talk I will discuss the Hausdorff dimension of a measure related to a positive weak solution of a certain partial differential equation in a simply connected domain in the plane. Our work generalizes work of Lewis and coauthors when the measure is p harmonic and also for p=2, the well known theorem of Makarov regarding the Hausdorff dimension of harmonic measure relative to a point in a simply connected domain. This is a joint work with John L. Lewis.

William O. Bray (Missouri State University)
Title: Growth & Integrability of Fourier Transforms
Abstract: In Euclidean space we discuss estimates of the following form _Z Rn min n 1; (t j_j2qo___b f(_)___qd__1=q_ cpkMtf 􀀀 fkp; here 1 < p _ 2, q is the conjugate Holder index, f 2 Lp(Rn); and b f is its Fourier transform. As such the estimate provides small and large j_j control over the Fourier transform in terms of a modulus of continuity defined via the spherical mean operator, Mtf. Our focus will be on using such estimates to obtain integrability results for the Fourier transform in the vein of classical work of Bernstein (for Fourier series) and Titchmarsh (for 1-d Fourier transform). In the talk we will also discuss variations on this theme found in recent works of Ditzian (2012) and Gorbachev and Tikhonov (2012) as well as versions of the results in the setting of rank one symmetric spaces of non-compact type.

Bo'az Klartag (Tel-Aviv University)
Title: Moment Measures
Abstract: We describe a certain bijection between convex functions in a finite-dimensional linear space X (modulo translations), and finite Borel measures on the dual space X* with barycenter at the origin. The construction is related to toric Kahler-Einstein metrics in complex geometry, to the Prekopa-Leindler inequality, and to the Minkowski problem in convex geometry.

Garving "Kevin" Luli (Yale University)
Title: Vector-valued extensions and smooth closures of ideals
Abstract: In this talk, we will discuss two problems: one in analysis and the other in algebraic geometry; and explain the surprising marriage between the two. This is a joint work with Charles Fefferman. The analysis problem asks us to decide whether a given vector of functions defined on a subset of R^n extends (with some tolerance on the errors) to a vector-valued function in some smooth function space defined on all of R^n; while the algebraic geometry problem asks us to decide whether a function can be expressed as a linear combination of some given functions, where the coefficients of the linear combination are in some smooth function space.

Hariharan Narayanan (University of Washington)
Title: Fitting manifolds to random data
Abstract: Increasingly, we are confronted with very high dimensional data sets. As a result, methods of avoiding the curse of dimensionality have come to prominence. One approach, which relies on exploiting the geometry of the data, has evolved into a subfield called manifold learning. The underlying hypothesis of this approach is that data tend to lie near a low dimensional submanifold, due to constraints that limit the degrees of freedom of the process generating them. This appears to be the case, for example, in speech and video data. Although there are many widely used algorithms which assume this hypothesis, the basic question of understanding when data lies near a manifold is poorly understood. We will describe joint work with Charles Fefferman and Sanjoy Mitter on developing a provably correct, algorithm to fit a nearly optimal manifold to random data and thereby test this hypothesis.

Monica Nicolau (Stanford School of Medicine)
Title: Geometric Transformations of Large Data
Abstract: The past decade has witnessed developments in the field of biology that have brought about profound changes in understanding the dynamic of disease and of biological systems in general. New technology has given biologists an unprecedented wealth of information, but it has generated data that is hard to analyze mathematically, thereby making its biological interpretation difficult. These challenges have given rise to a myriad novel exciting mathematical problems and have provided an impetus to modify and adapt traditional mathematics tools, as well as develop novel techniques to tackle the data analysis problems raised in biology. I will discuss a general approach to address some of these computational challenges by way of a combination of geometric data transformations and topological methods. These methods have been applied in a wide range of settings, in particular for the study of the biology of disease. I will discuss some concrete applications of these methods, including their use to discover a new type of breast cancer, identify disease progression trends, and highlight the driving mechanisms in acute myeloid leukemia. While the specifics of the work are focused on biological data analysis, the general approach addresses computational challenges in the analysis of any type of large data. Much of this work is joint with Gunnar Carlsson.

Pavel Shvartsman (Technion-Israel Institute of Technology, Haifa, Israel)
Title: Extensions of BMO-functions and _xed points of contractive mappings in L2
Abstract: Let E be a closed subset of Rn of positive Lebesgue measure. We discuss a constructive algorithm which to every function f de_ned on E assigns its almost optimal extension to a function F(f) 2 BMO(Rn). We obtain the extension F(f) as a _xed point of a certain contractive mapping Tf : L2(Rn) ! L2(Rn). The extension operator f ! F(f) is non-linear, and in general it is not known whether there exists a continuous linear extension operator BMO(Rn)jE ! BMO(Rn) for an arbitrary set E. In this talk we present a rather wide family of sets for which such extension operators exist. In particular, this family contains closures of domains with arbitrary internal and external cusps. The proof of this result is based on a solution to a similar problem for spaces of Lipschitz functions de_ned on subsets of a hyperbolic space.

Amit Singer (Princeton University)
Title: Vector Diffusion Maps and the Connection Laplacian
Abstract: Vector diffusion maps (VDM) is a new mathematical framework for organizing and analyzing high dimensional data sets, 2D images and 3D shapes. While existing methods are either directly or indirectly related to the heat kernel for functions over the data, VDM is based on the heat kernel for vector fields. VDM equips the data with a metric, which we refer to as the vector diffusion distance. In the manifold learning setup, where the data set is distributed on a low dimensional manifold M^d embedded in R^p, we prove the relationship between VDM and the connection-Laplacian operator for vector fields over the manifold. Applications to structural biology (cryo-electron microscopy and NMR spectroscopy) and computer vision will be discussed. Joint work with Hau-tieng Wu.

Rachel Ward (University of Texas at Austin)
Title: Strengthened Sobolev inequalities for a random subspace of functions
Abstract: We introduce discrete Sobolev inequalities for functions on the unit cube satisfying certain random collections of linear constraints, including constraints on the discrete Fourier transform. We then explain how these inequalities provide near-optimal error rates for image reconstruction by total variation in the compressed sensing setting. We finish by discussing several open problems.

Hau-tieng Wu (Stanford University)
Title: Diffusion and Laplacian on the bundle structure and their Applications
Abstract: We start from introducing vector diffusion maps (VDM), a new mathematical framework for organizing and analyzing massive high dimensional data sets, images and shapes. VDM is a mathematical and algorithmic generalization of diffusion maps and other non-linear dimensionality reduction methods, such as LLE, ISOMAP and Laplacian eigenmaps. While existing methods are either directly or indirectly related to the heat kernel for functions over the data, VDM is based on the heat kernel for 1-forms and vector fields. VDM provides tools for organizing complex data sets, embedding them in a low dimensional space, and interpolating and regressing vector fields over the data. In particular, it equips the data with a metric, which we refer to as the {\em vector diffusion distance}. In the manifold learning setup, where the data set is distributed on a low dimensional manifold $\text{M}^d$ embedded in $\mathbb{R}^p$, we prove the relation between VDM and the connection-Laplacian operator for 1-forms over the manifold. The algorithm is directly applied to the cryo-EM problem and the result will be demonstrated.
The relationship between VDM and frame bundle structure turns out to offer a new approach to understand a given massive high dimensional data. Indeed, by estimating the associated tangent bundle, we are able to determine the orientability of a given manifold and construct a new estimator of the Laplace-Beltrami operator. This approach turns out to be intimately related to the regression problem in statistics. Parallel to the generalized Nadaraya-Watson kernel approach, the locally linear regression can be generalized to the manifold structure once the bundle structure is taken into account.

Po-Lam Yung (Rutgers University)
Title: A subelliptic divergence-curl inequality
Abstract: The classical Gagliardo-Nirenberg inequality states that if u is a smooth function with compact support on Rn, then kukLn=(n􀀀1) _ CkrukL1 : It was only very recently that Lanzani-Stein and Bourgain-Brezis extended this inequality, from functions to di_erential forms of higher degrees. In this talk, we will discuss an analogue of their results in several complex variables. We will see a Gagliardo-Nirenberg inequality for (0; q) forms on the Heisenberg group, and this is joint work with Yi Wang.

Nahum Zobin (College of William and Mary)
Title: Quantization of Whitney problems
Abstract: Quantitative versions of Whitney problems require construction of functions with prescribed values on a given _nite subset E _ Rn, which minimize a preferred functional norm. After solving this minimization problem we want to compute some natural functionals of the minimizer, e.g., its values at other points. Quantization is an art of replacing a mini-mization problem by a problem of computing certain amplitudes (similar to expected values) for a system where the preferred functional norm is treated as an action functional. There is an interesting connection between the computation of amplitudes (which are represented as functional integrals) and computations of convolutions of functions on some important unipotent Lie groups, similar to the Heisenberg-Weyl groups.