"Multiparameter Geometry and Analysis." A series of five lectures by Alexander Nagel (University of Wisconsin). 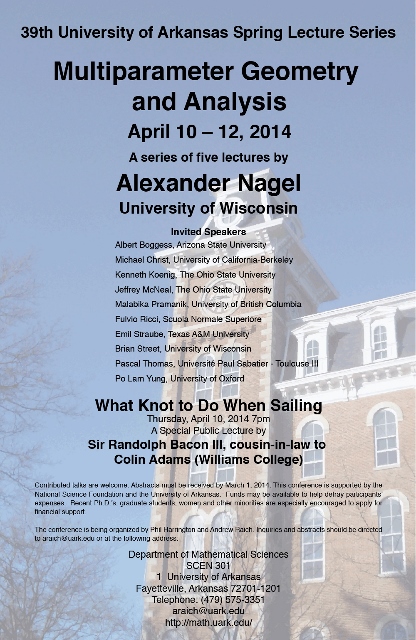 Al Boggess (Arizona State University)
Title: Survey of Estimates for the Solutions of \Box_b and the \Box_b Heat Equation
Abstract:This presentation will start with the definitions of \Box_b and the \Box_b heat equation along with the relationship between these two operators. The fundamental solutions to these operators can be estimated by a combination of the control and Szego metrics in the case of a hypersurface in C^n defined by a decoupled set of polynomial equations. A survey of such estimates obtained by various researchers, including joint work with Andrew Raich, will be presented. Progress to date on the construction and estimate of solutions in higher codimenstion will also be presented.

Michael Christ (University of California-Berkeley)
Title: A Sharpened Hausdorff-Young Inequality
Abstract: For any locally compact Abelian group, the Hausdorff-Young inequality states that the Fourier transform maps $L^p$ to $L^q$, where the two exponents are conjugate and $p\in[1,2]$. For $\reals^d$, the optimal constant was found Babenko for $q$ an even integer, and by Beckner (1975) for general exponents. Lieb (1990) showed that all extremizers are Gaussian functions. This is a uniqueness theorem; these Gaussians form the orbit of a single function under the group of symmetries of the inequality.
We establish a stabler form of uniqueness: If a function $f$ nearly achieves the optimal constant in the inequality, then $f$ must be close in norm to a Gaussian. This can equivalently be formulated as a precompactness theorem in the style of the calculus of variations. Such a result can also be viewed as a sharpening of the inequality. Because the symmetry group includes the full affine group, this is multi-parameter analysis in one sense.
The proof relies on ingredients taken from from additive combinatorics. Central to the reasoning are arithmetic progressions; more exactly, arithmetic progressions of arbitrarily high rank. Thus this is in a (second) sense infinite--parameter analysis.

Michael Gilliam (The College of New Rochelle)
Title: The Szeg\"{o} Kernel for Certain Non-pseudoconvex Domains in $\mathbb C^2.$
Abstract: [PDF] The Szeg\"{o} projection operator associated with a domain $\Omega$ in $\mathbb C^n$ with smooth boundary is of fundamental interest in complex analysis. Its action can often be expressed as integration against a distribution, known as the Szeg\"{o} kernel, on $\partial\Omega\times\partial\Omega,$ which is equal to a smooth function off some exceptional set. Understanding the relative structure of this set and obtaining sharp size estimates of the kernel for points near this set is essential for understanding the mapping properties of the operator. There are many results of this nature for pseudoconvex domains of finite-type, where the exceptional set is precisely the diagonal of $\partial\Omega\times\partial\Omega.$ Comparatively little is known for non-pseudoconvex domains. We discuss the latter for a subclass of tubular domains in $\mathbb C^2$ and show, in particular, that the exceptional set contains points on {\it and off} of the diagonal.

Jennifer Halfpap (University of Montana)
Title: The Szegö Kernel for non-pseudoconvex domains in C2 and an associated family of exponential integrals
Abstract: [PDF] In the harmonic analysis approach to the Szego and Bergman projection operators, one uses the Fourier transform to derive an explicit expression for the kernel as a certain oscillatory integral. This approach, pioneered by Nagel, Stein, Wainger, and others, yielded proofs of the Lp boundedness of these operators for smoothly bounded pseudoconvex domains of nite type in C2. For domains that are not pseudoconvex or not of nite type, the approach is still valid, but the analysis of the resulting oscillatory integral is much more delicate. In particular, it requires detailed information about a certain family of exponential integrals. In this talk, we discuss recent and ongoing work on this problem.

Chizuko Iwaki (University of Arkansas)
Title: Strong Stein Neighborhood Bases for Nonsmooth Pseudoconvex Domains
Abstract: In 1998, Michel and Shaw defined a strictly pseudoconvex Lipschitz domain to be a domain with a Lipschitz defining function that is strictly plurisubharmonic in a neighborhood of the boundary. Inspired by this definition, I showed that if the defining function is only strictly plurisubharmonic inside the domain, then under certain conditions, one can still find a Strong Stein neighborhood Basis outside the domain. This is part of my thesis research with Phil Harrington.

Bingyuan Liu (Washington University in St. Louis)
Title: Characterization of domains by their automorphism groups
Abstract: [PDF] Using holomorphic automorphism of a Ω domain to characterize the property of Ω dates back the time of Cartan. This point of view was developed since 1970s by many people, like Bedford, Greene, Pinchuk, Kim, Krantz, Pinchuk, Rosay, Verma and Wong. In particular, the Wong and Rosay gave separately their theorems that noncompact automorphism groups which accumulates at a strongly pseduconvex point can happen only for the ball. Later, Greene-Krantz gave their conjecture that the orbit accumulation points of the noncompact automorphisms should be of nite type. In this talk, we consider the question from another aspect. We prove, in C2, the fact of (global) pseudoconvexity of the Ω domain after assuming some conditions on the behaviors of the automorphism groups. We also generalize the well-known Wong-Rosay Theorem to the Kahler manifold.

Aaron Peterson (University of Wisconsin-Madison)
Title: Estimates for the Szeg\H{o} kernels of uniformly finite-type domains
Abstract: This talk will introduce the study of \bar{\partial}_b on uniformly finite-type domains, or unbounded model subdomains of \mathbb{C}2 whose boundaries satisfy a uniform local finite-type hypothesis. I will discuss precise growth and cancellation estimates for the Szeg\H{o} kernel on such domains.

Malabika Pramanik (University of British Columbia)
Title: Kakeya-type sets and directional maximal operators for a Cantor set of directions
Abstract: In joint work with Edward Kroc, we establish that in an Euclidean space of any dimension,sets of directions generated by Cantor-like subsets of curves admit Kakeya-type sets. This implies unboundedness of the corresponding directional maximal operator.

Emil Straube (Texas A&M University)
Title: Sobolev estimates for the complex Green operator on CR submanifolds of hypersurface type
Abstract: Let $M$ be a pseudoconvex, oriented, bounded and closed CR submanifold of $\mathbb{C}^{n}$ of hypersurface type. Our main result says that when a certain $1$-form is exact on the null space of the Levi form, then the complex Green operator on $M$ satisfies Sobolev estimates. This happens in particular when $M$ admits a set of plurisubharmonic defining functions or when $M$ is strictly pseudoconvex except for the points on a simply connected complex submanifold. This is joint work with Yunus Zeytuncu.

Emil Straube (Texas A&M University)
Title: Sobolev estimates for the complex Green operator on CR submanifolds of hypersurface type
Abstract: Let $M$ be a pseudoconvex, oriented, bounded and closed CR submanifold of $\mathbb{C}^{n}$ of hypersurface type. Our main result says that when a certain $1$-form is exact on the null space of the Levi form, then the complex Green operator on $M$ satisfies Sobolev estimates. This happens in particular when $M$ admits a set of plurisubharmonic defining functions or when $M$ is strictly pseudoconvex except for the points on a simply connected complex submanifold. This is joint work with Yunus Zeytuncu.

Michael Tinker (University of Arkansas)
Title: Heat kernel estimates for Schr\"{o}dinger operators with reverse H\"{o}lder potentials
Abstract: [PDF] Given $\bar{D} = \bar{\partial} + \tau P_{\bar{z}}$ on $L^2(\mathbb{C})$, $\tau > 0$, and $D$ its formal adjoint, the heat kernel associated $\bar{D}{D}$ has been studied by Christ when $\Delta P$ is a doubling measure and later by Raich when $P$ is a subharmonic, nonharmonic polynomial. Both were motivated by a connection to the three-dimensional CR manifold $M \subset \mathbb{C}^2$ defined by $\textrm{Im}\,w = P(z)$; after $M$ is identified with $\mathbb{C}\times\mathbb{R}$, $\bar{\partial}_{b}$ on $M$ goes over to $\bar{D}$ under a Fourier transform in the real direction. We begin in this setting with $P(x,y) = P(x)$, where $P \in C^2(\mathbb{R})$ satisfies a reverse H\"{o}lder condition. Now a Fourier transform in the $y$-direction is also possible; we obtain upper bounds on the heat kernel associated to $\hat{\bar{D}}\hat{D}$ by improving known results for Schr\"{o}dinger operators.

Po Lam Yung (University of Oxford)
Title: An algebra of pseudodifferential operators with mixed homogeneities
Abstract: In this talk, we introduce an algebra of pseudodifferential operators with mixed homogeneities, when a smooth distribution of tangent subspaces is given on a manifold. We have in mind applications to several complex variables, when the manifold is the boundary of a strongly pseudoconvex domain in $\mathbb{C}^n$, and the relevant distribution is the contact distribution. The goal is to understand the phenomena that arise when one composes elliptic operators with sub-elliptic operators. This is joint work with E.M. Stein.