A winter storm has prompted changes to the Spring Lecture Series schedule.

The series will begin with talks by principle lecturer Benson Farb, Thursday, March 5 at 1:30 p.m. in Reynolds Center, room 202. 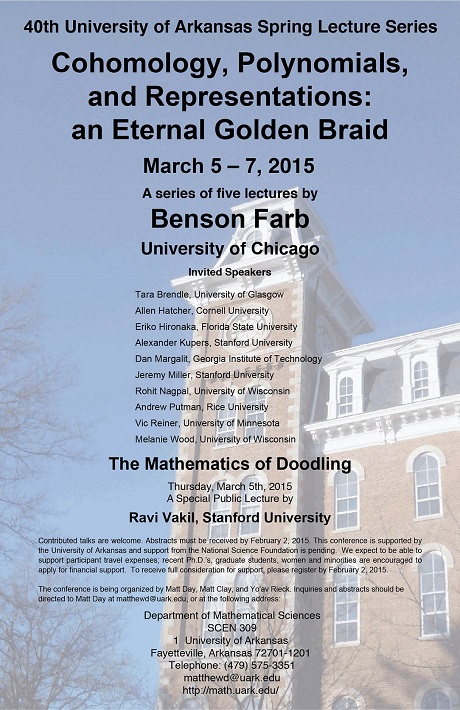 Doodling is the subject of the public lecture “The Mathematics of Doodling,” presented by Ravi Vakil, professor and Robert K. Packard University Fellow at Stanford University, Thursday, March 5 at 7 p.m. in the Reynolds Center Auditorium. Often sophisticated mathematics are buried inside common doodles. Although is looks like play, Vakil will discuss how doodles, through geometry, topology, physics, reflect what mathematics is really about – finding patterns in nature, explaining them and extending them. A reception will follow.

The principle lecturer for the series is Professor Benson Farb of the University of Chicago. Through a series of five talks, he will explain interconnections between polynomials and braids (like braiding rope), and deeper mathematical topics such as cohomology and representations of groups. Farb specializes in the interaction between geometry, topology and group theory. A common theme of these subjects is how complicated objects are sometimes determined by very simple data.

The lectures will take place Thursday through Saturday in the Reynolds Center.

The Spring Lecture Series is sponsored by the National Science Foundation and the University of Arkansas.

The series is free and open to the public.

Abstract: My goal in these talks is to explain some fascinating interconnections among the four (yes, four) mathematical topics in the title. The story will take us from spaces of configurations of points on a manifold, to Arnold's topological proof that the quintic can't be solved by radicals, to representation theory of the symmetric group, to cohomology theory, to congruence subgroups, to counting points on varieties over finite fields, and beyond. Most of the material in these lectures should be understandable to an undergraduate math major.

Abstract: Doodling has many mathematical aspects: patterns, shapes, numbers, and more. Not surprisingly, there is often some sophisticated and fun mathematics buried inside common doodles. I'll begin by doodling, and see where it takes us. It looks like play, but it reflects what mathematics is really about: finding patterns in nature, explaining them, and extending them. By the end, we'll have seen some important notions in geometry, topology, physics, and elsewhere; some fundamental ideas guiding the development of mathematics over the course of the last century; and ongoing work continuing today.

Abstract: In 1997 Ivanov proved that the automorphism group of the complex of curves associated to a surface S is isomorphic to the extended mapping class group Mod(S), for most surfaces. His work generated a flurry of activity, with similar results obtained by several different authors for various other simplicial complexes associated to surfaces. Ivanov then posed a "metaconjecture" stating that every "sufficiently rich" complex associated to a surface S has Mod(S) as its group of automorphisms. In this talk we will discuss a resolution of Ivanov's metaconjecture for a wide class of complexes. This is joint work with Dan Margalit.

Abstract: We describe geometric constructions for the known nontrivial rational homology classes in the automorphism and outer automorphism groups of free groups, as well as for many candidates for further nontrivial classes. This is part of a general approach to understanding the homology of these automorphism groups by assembling homology classes coming from small rank free groups into classes for larger ranks. This is from joint work with Jim Conant, Martin Kassabov, and Karen Vogtmann.

Abstract: A 2-complex with semi-flow has a corresponding dual directed graph. In this talk, I will explain how to obtain from this information a polynomial invariant that is independent of homotopy equivalences preserving the semi-flow. Under certain conditions, we show that this is analogous to McMullen's Teichmueller polynomial, and computes the mondromy entropies of maps from the fundamental group of the complex to the infinite cyclic group. This work is joint with Yael Algom-Kfir and Kasra Rafi.

Abstract: To each homeomorphism of a surface we can associate a real number - called the entropy - which encodes the amount of mixing being effected. This number can be studied from topological, geometrical, dynamical, analytical, and algebraic viewpoints. We will start by explaining Thurston's beautiful insight for computing the optimal entropy within a homotopy class and explain a new, fast algorithm based on his ideas. Then we will discuss some classical results and recent progress on the problem of understanding phenomena related to small entropy. One theme is that algebraic complexity and geometric complexity both imply dynamical complexity. This work is joint with Ian Agol, Benson Farb, Chris Leininger, and Oyku Yurttas.

Abstract: We will talk about the category of finitely generated FI-modules which was introduced by Church, Ellenberg and Farb to study stability patterns in the representation theory of the symmetric groups Sn. An FI-module V over a commutative ring k encodes a sequence (Vn)n≥0 of representations of the symmetric groups (Sn)n≥0 over k. We outline a proof of the periodicity of the cohomology groups Ht(Sn, Vn) when k is a field of characteristic p and V is a finitely generated FI-module over k. As a direct application, we show that if M is compact, connected, oriented manifold of dimension ≥ 2 and confn(M) is the configuration space of unordered n-tuples of distinct points in M then the dimensions of the mod-p cohomology groups Ht(confn(M), k) are eventually periodic in n with period a power of p. We point out some open problems and other recent works in this direction.

Andrew Putman (Rice University)
Title: Integrality in the Steinberg module and the top-dimensional cohomology of SLn(O)

Abstract: I will discuss the relationship between the arithmetic of the ring of integers in an algebraic number field O and the high-dimensional cohomology of SLn(O). This is joint work with Thomas Church and Benson Farb.

Abstract: T. Church proved a representation theory stability result for the cohomology of the configuration space of n distinct labelled points in a connected, oriented d-manifold having finite-dimensional cohomology. He showed that the symmetric group representation on the i-th cohomology of such a configuration space eventually stabilizes in a precise sense, and that the stabilization will occur for n beyond 4i when d=2, and for n beyond 2i when d is at least 3.

In the very special case when the manifold is d-dimensional Euclidean space, we show that the stabilization starts earlier, sharply at n=3*i/(d-1) for odd d, and at n = 1 + 3*i/(d-1) for d even. We suspect this is the earliest that stabilization for d-manifolds.

Abstract:
Given some class of "geometric spaces", we can make a ring as follows.

In the algebraic setting, this ring (the "Grothendieck ring of varieties") contains surprising “stabilization” structure, connecting geometry to arithmetic and topology. I will discuss some remarkable statements about this ring (both known and conjectural), and present new statements (again, both known and conjectural). A motivating example will be polynomials in one variable. (This talk is intended for a broad audience.) This is joint work with Melanie Matchett Wood.

Sean Howe (University of Chicago)
Title: Point counting, stability, and the complement of the discriminant locus

Abstract: In this talk we consider the action of symmetric group Sn on the i-th rational cohomology group of Mg,n, the moduli space of genus g Riemann surfaces with n marked points. We discuss how this sequence of Sn-representations has the underlying structure of a finitely generated FI-module and ``stabilizes'' in a certain sense once n is large enough. As a consequence we obtain that, for n large enough with respect to i, the i-th Betti number of Mg,n is a polynomial in n of degree at most 2i.

Abstract: Over the past several years Church, Ellenberg, Farb, Nagpal, and others have developed machinery for studying sequences of representations of the symmetric groups, using a concept they call an FI--module. I will describe how their work generalizes to sequences of representations of the Weyl groups in type B/C and D. I will outline some applications, including stability results for the cohomology of certain families of groups and spaces related to the (pure) braid groups.

Abstract: In the late '70s, Graeme Segal showed that the homology of the space of rational functions of fixed degree on a Riemann surface stabilizes as the degree tends to infinity. In ongoing joint work with Benson Farb, we revisit these spaces through the lens of representation stability, and use this make computations of their rational cohomology. These computations carry implications for point counts and related statistics for rational functions of curves over finite fields. In this talk, I'll aim to give background and context for our investigation, and describe some of the phenomena we are encountering.