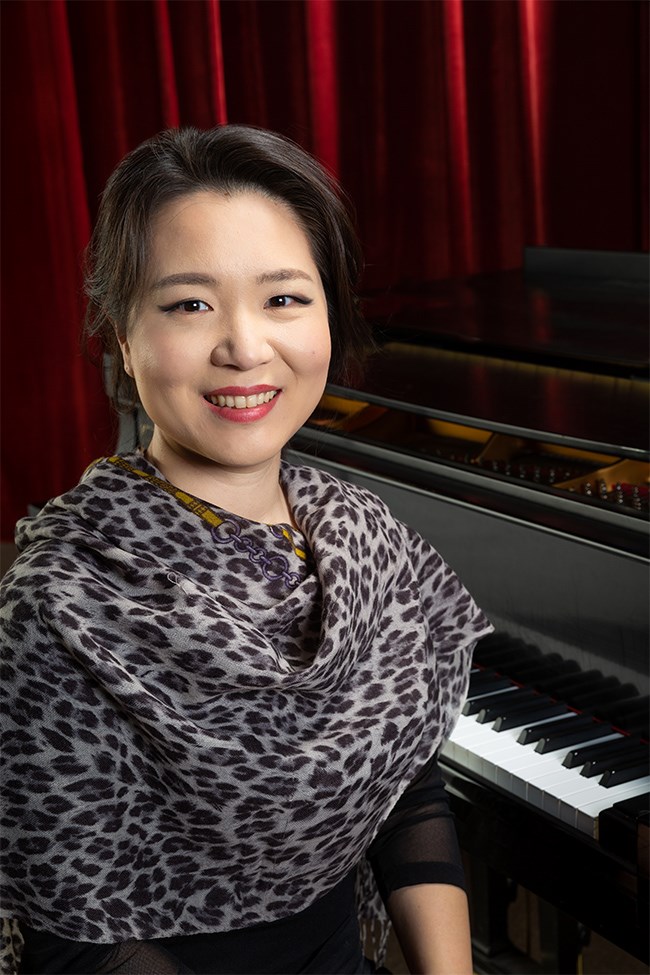 Pianist Dr. Hyun Kim, native of South Korea, joined the faculty at the University of Arkansas in the fall of 2018.  She performs and teaches throughout the United States and is frequently engaged in performances and master classes in Asia, Europe, and South America.

As an educator, Kim has taught piano and chamber music and has coached opera productions at several music institutions in the United States as a faculty member, such as at Metropolitan State University of Denver, the University of Colorado Boulder, and Miami University.  She has also been appointed internationally as a guest artist and clinician at the Federal University of Santa Catarina and at the University of Campinas in Brazil.  Her particular interest in young artists has led her to serve as an adjudicator for the annual Tasco Young Artists Competition.

Kim is active with several scholarly organizations internationally and her most recent projects have been with Song of the New Generation in Asia, an organization that she founded to promote the research and performance of the contemporary art song medium, and Kim has served as a committee member with Sintonize Produtora Cultural, a new music festival in Brazil.  She has delivered lectures on career development and entrepreneurship for pianists, ballad form in nineteenth-century lieder, metrics and rhythmic relationships in Brahms’ Ballade, and poetics and syntax in contemporary English-language art songs at art associations as well as universities.  She wrote two theses based on unexplored works: Schubert's Ballad „Die Bürgschaft,“ D. 246: An Operatic Microcosm, and Jean Berger: A Study of his Life Experience as it Pertains to his Art Songs.

While Kim was in South Korea, she earned a Bachelor of Music degree in piano performance and a Master of Music degree in collaborative piano.  She then pursued a second Master of Music degree in piano accompanying and vocal coaching from the University of Cincinnati, College-Conservatory of Music, where she studied under Kenneth Griffith, Richard Morris, Michael Chertock, and Sandra Rivers.  Kim also studied harpsichord with Vivian Montgomery and organ with Roberta Gray while at Cincinnati.  She then earned her Doctor of Musical Arts from the University of Colorado Boulder in collaborative piano under Anne Epperson, Margaret McDonald, Alexandra Nguyen, Robert Spillman, and Mutsumi Moteki.  While at the University of Colorado Boulder, she worked closely with the world-renowned Takács String Quartet and with Maestro Nicholas Carthy. Kim’s interest in literature and music led her to additional studies in France at the Conservatoire National Supérieur de Musique de Paris.