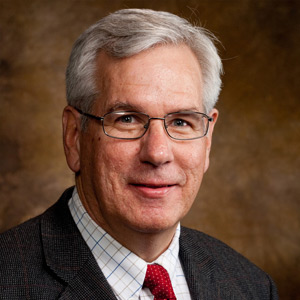 Chalon Ragsdale came to the University of Arkansas in 1975 as Percussion Instructor and Assistant Band Director. He currently serves as Director of Percussion Studies, and Director of the UA Summer Music Camps. From 1990-1998, he was Chair of the UA Department of Music.

Mr. Ragsdale has received recognition as a music arranger, and is published by Southern Music Company of San Antonio, Texas. His band arrangements featuring percussion have been featured at several CBDNA conventions, and his Tribute to Grainger for Concert Band was chosen for performance on the 1999 Mid-West Clinic.

Mr. Ragsdale earned an undergraduate degree in Music Education from Auburn University in Auburn, Alabama in 1973 and the Master of Music degree in Percussion Performance from East Carolina University in Greenville, North Carolina in 1975. He served as Director of Instrumental Music in the Tallapoosa County, Alabama school district from 1973-74. He has studied percussion principally with Harold A. Jones, Johnnie Vinson, and Larry Mathis. Professor Ragsdale is sponsored by Innovative Percussion, makers of specialty sticks and mallets.