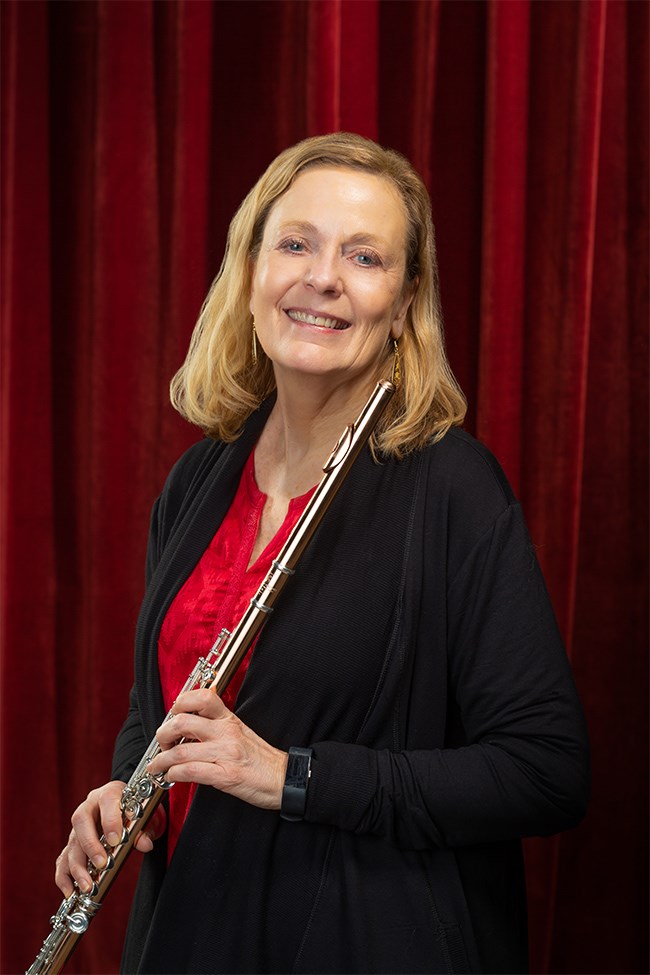 Ronda Mains is professor of flute/music education and chair of the Department of Music. She is principal flutist of the North Arkansas Symphony and performer with the Lyrique Quintette, Cholthichanta/Mains Duo and Zephyr Trio. Dr. Mains has appeared as a soloist with the North Arkansas Symphony, University of Arkansas Symphony Orchestra and Wind Symphony, Oregon Winds, Boise Summer Symphony, the Treasure Valley Wind Ensemble, and the Boise State University Symphony and Wind Ensemble. She has performed solo and chamber music nationally and abroad; in 1998, she performed at the National Flute Convention in Phoenix, Arizona. An advocate of contemporary music, Dr. Mains has been actively involved in commissioning and recording new works with her chamber groups. She can be heard with Novaria on a CD featuring new music for flute and guitar and with the Lyrique Quintette on a CD entitled Something Old, Something New, Something Borrowed, Something Blue. As a member of the quintet, she has been involved in editing transcriptions for quintets. Dr. Mains is the author of several articles.

In 2001 she was a recipient of the Arkansas Alumni Association Distinguished Achievement Award in Teaching; in 2000 her teaching was recognized by a Fulbright College Master Teacher Award. She has been a member of the University Teaching Academy since 2002.

In 1997-1998 Dr. Mains spent a year as a Visiting Fellow of Lucy Cavendish College at Cambridge University, England where she pursued a research interest in performance practices of the Baroque era and studied modern flute in London. She is currently pursuing an interest in the performance techniques of ethnic flutes. Other research interests include learning theory and memory.