CALABRETTA-SAJDER SERVES AS EDITOR FOR BOOK ON PASOLINI

“Conducting research only leads to more questions, otherwise you have done something wrong,” said Dr. Ryan Calabretta-Sajder in an interview about his recent edited volume, entitled Pasolini’s Lasting Impressions: Death, Eros, and Literary Enterprise in the Opus of Pier Paolo Pasolini.

This collection examines the multi-faceted opus of Pier Paolo Pasolini through a contemporary critical lens. It offers new interpretations to some classic works of Pasolini, such as Salò or the 120 Days of Sodom or Decameron, while considering some lesser-studied pieces, for example Orestiade and his Friulian Verse.

This collection could be used for both undergraduate and graduate students, international Pasolini scholars, and even those who work on postmodern cinema, poetry, culture, and philosophy.

Calabretta-Sajder, visiting assistant professor of Italian in the Department of World Languages, said the entire project was born out of a special session at the South Central MLA conference in San Antonio.

“I organized a panel on ‘Death, Eros, and Literary Enterprise in the Works of Pier Paolo Pasolini.’ As people heard of the session and my interest in editing a volume, the work continued to grow,” he added.

The project spanned more than five years, starting with the organization of the first conference session, and according to Calabretta-Sajder, involved talented people who offered unique, diverse, and often contradictory readings or interpretations of the same texts or the works of the same author.

One of the most fascinating elements of the book is the cover. The man on the cover is Pasolini, wearing a Captain America mask, and behind him are newspaper clippings of his death notices.

“The cover is the work of a street artist in Rome, omino71, whose work I first saw in Pigneto, one of the neighborhoods Pasolini often frequented,” added Calabretta-Sajder. “We contacted the artist and got permission to use the image and my colleague and dear friend Fabio Benincasa interviewed him for the piece.”

As the book developed, many scholarly articles were added, new sections were born, and a friend was lost during the collaborating process. William Van Watson passed away suddenly during the production of the book; the volume is dedicated to him and his groundbreaking work on Pasolini. 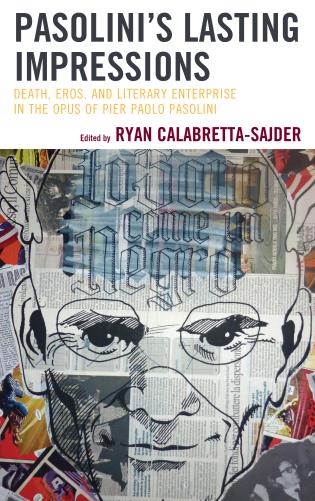