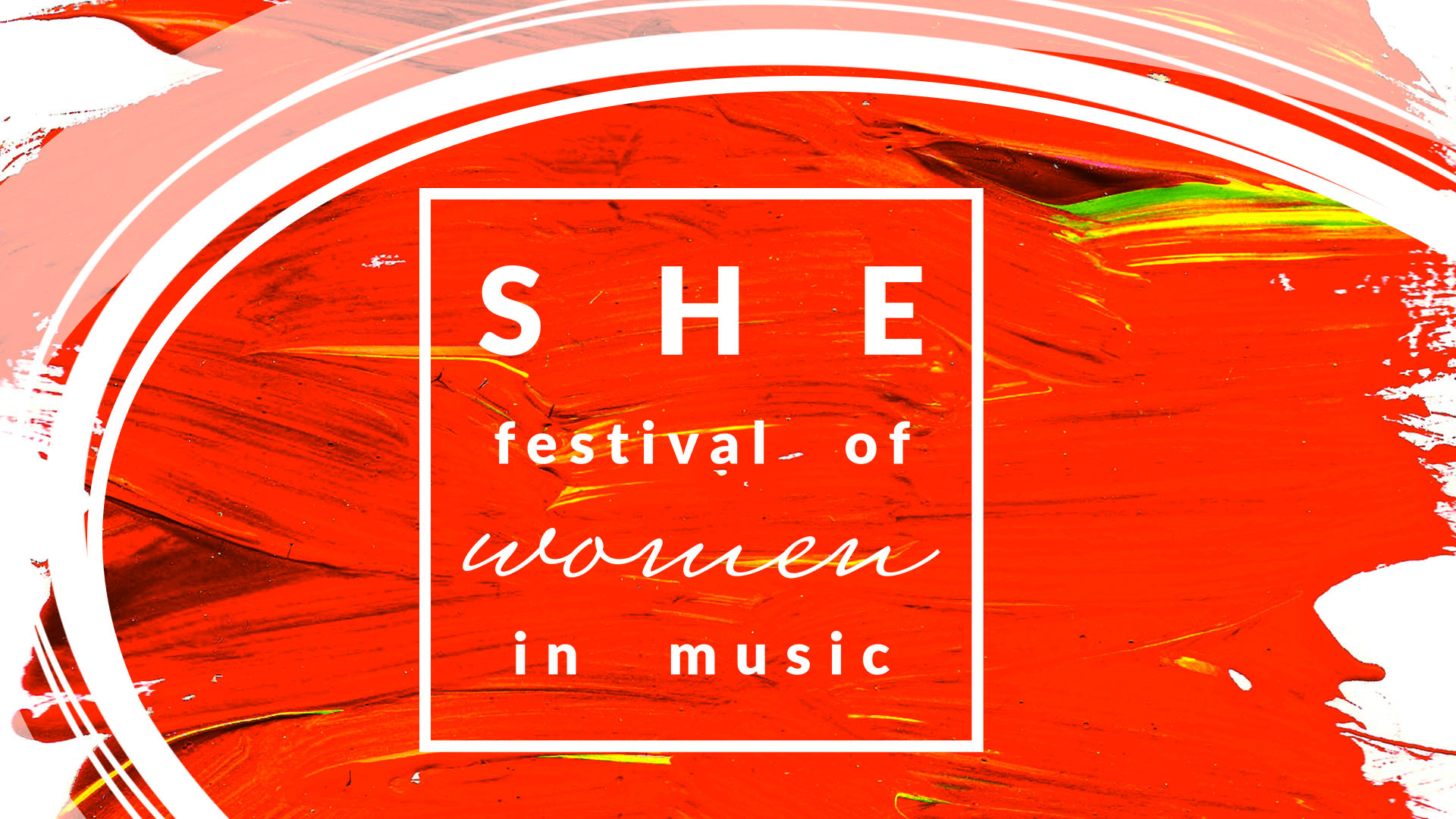 SHE Festival of Women in Music
A festival celebrating the achievements and contributions of women in music.

The SHE Festival returns for its third year in an all virtual format. SHE is presented by the Department of Music in partnership with the University of Arkansas Community Music School. This year's events are made possible by generous funding from the J. William Fulbright College of Arts & Sciences and the Office of Diversity and Inclusion. Special thanks to Dr. Yvette Murphy-Urby, Dr. Todd Shields, and Dr. Ronda Mains for their continued support.

The festival begins and ends with vignette performances by the Department of Music faculty and students. For the first time, the festival is joined by student from the University of Arkansas Community Music School. This new partnership with the outreach arm of the department brings wonderful videos of young talented musicians. These mini concerts are featured on the Department of Music YouTube Channel - youtube.com/c/uarkmusic and announced via social media and listed below.

In addition to the vignettes, the festival welcomes five amazing guest artists. These women bring their experience as active performers, composers, and researchers to the 2021 SHE Festival for our audiences to grow and learn. Each event will be hosted on Zoom (links below) and archived on the Department of Music's YouTube Channel.

While regrettably we cannot join you in person this year, we hope you will join us in the 2021 SHE Festival of Women in Music virtually. All Zoom events require registration.

Libby Larsen (b. 24 December 1950, Wilmington, Delaware) is one of America’s most prolific and most performed living composers. She has created a catalogue of several hundred works spanning virtually every genre and has established a permanent place in concert repertory. Her music has been praised for its dynamic, deeply inspired, and vigorous contemporary American spirit. Grammy Award  winning, her music is constantly sought after for commissions and premieres by major artists and ensembles around the world. A 2018 biography, Libby Larsen: Composing an American Life, by Dr. Denise Von Glahn is available from the University of Illinois Press, 2018.

One of the most important and celebrated composers working today, Libby Larsen is consistently sought-after as a leader in the generation of millenium thinkers, Larsen’s music and ideas have refreshed the concert music tradition and the composer’s role in it.

She’s been called “A mistress of orchestration (The Times Union)” as well as “the only English-speaking composer since Benjamin Britten who matches great verse with fine music so intelligently and expressively (USA Today).”  Gramophone has called her Symphony: Water Music “the finest water music since Respighi’s Fountains.”  “... her use of synthesized sound points to options that could help opera survive into the 21st century (USA Today).”

Larsen is a vigorous, articulate advocate for the music and musicians of our time.  In 1973 she co-founded the Minnesota Composers Forum, now the American Composer’s Forum, which has been an invaluable aid for composers in a difficult, transitional time for American arts.  The first woman to serve as a resident composer with a major orchestra, Larsen has held residencies with the Minnesota Orchestra, the Charlotte Symphony and the Colorado Symphony. In 2006, Larsen held the Chair of Education and Technology at the John Kluge Center, Library of Congress.

Larsen’s awards and accolades are numerous; she was given a 1994 Grammy as producer for the CD The Art of Arleen Auger, an acclaimed recording that features Larsen’s Sonnets from the Portuguese.  Her opera, Frankenstein, The Modern Prometheus was selected as one of the eight best classical musical events of 1990 by USA Today.  She counts among her awards the Peabody Medal for Outstanding Leadership in American Music, the MIT McDermott Award, the McKnight distinguished Artists Award, and the American Academy of the Arts Lifetime Achievement Award. Her music has been commissioned and performed widely by the world’s greatest artists.

Alyssa Morris has delighted audiences around the world with her “skillful,” “fashionable,” and “commendable” musicianship (Fanfare).  Dr. Morris serves as Assistant Professor of Oboe at Kansas State University.  She has appeared as a soloist in venues throughout the United States, Scandinavia, the British Isles, and Western Europe. She performed as a recitalist at the 2014 and 2016 International Double Reed (IDRS) Conventions at New York University and Columbus State University.  Dr. Morris was Associate Principal Oboe of the Richmond Symphony Orchestra, and has also held positions with the Utah Wind Symphony and the Utah Baroque Ensemble. She has additionally performed with the Cincinnati Chamber Orchestra, the Cincinnati Bach Ensemble, the Kentucky Symphony Orchestra, and the Utah Lyric Opera.

Regarding her equally expansive work as a composer, the American Record Guide writes that Dr. Morris’s music “stands out” as “elegant” and “imaginative.” Her chamber music is performed extensively around the world, and has been presented at five IDRS Conventions, the National Flute Association Convention, and the Society of Composers Inc. National Convention.

A native of Jackson, Mississippi, Phyllis Lewis-Hale has performed in Italy, Japan, Taiwan, Germany, Austria, Bermuda and throughout the United States.  Some highlights in her career include receiving several performance awards, such as the winner of the IBLA Grand Prize in the International “Monteverdi” Vocal Competition held in Italy, a winner in the New Jersey Association of Verismo Opera Vocal Competition held in New York, and the recipient of an Encouragement Award from the Metropolitan Opera National Council Awards.  She recorded the “Songs of Separation” of William Grant Still for WGUC Radio in Cincinnati, Ohio.  She has also served as an assistant director of opera and the director of opera scenes for various programs for the last sixteen years.  She has staged scenes for The Brevard Music Center in North Carolina, the University of Cincinnati College Conservatory of Music, and Jackson State University.

As an avid researcher, Lewis-Hale’s efforts include the resurgence of the Negro Spiritual as a song of comfort and healing in the 21st century, identifying, preserving and performing concert adaptations of the underexplored folk songs that originated with the African slaves who were dispersed throughout the United States in the mid-eighteenth and nineteenth centuries and the art songs and operas composed by African-American composers. Lewis-Hale has presented lecture/recitals at numerous colleges and universities and conferences such as the National Association of African-American Studies National Conference, the National Association of Teachers of Singing’s State, Regional and National Conferences and the Super Regional and National Conferences of the College Music Society. Her most recent publication, “From Old Creole Days: Sampling the Afro-Creole Folk Song of Louisiana of the Late Nineteenth through the Twentieth Centuries” was published in the National Association of Teachers of Singing, Journal of Singing. She also presented a lecture-recital on the same topic at the 55th NATS National Conference which was held in Las Vegas, Nevada and at other regional and national conferences in the past several years.

Lewis-Hale received the Masters and Doctoral degrees from the University of Cincinnati College-Conservatory of Music and the Bachelor of Music Education degree for Jackson State University in Jackson, Mississippi. She currently serves as an Assistant Professor of Voice and the Director of the Opera Workshop at Jackson State University.  She has served as the Mississippi District Governor and President of the National Association of Teachers of Singing and the Vocal Area Chair and Vice President for Collegiate and National Competitions of the Mississippi Music Teachers Association. She recently received a Mississippi Humanities Council Grant in support of a project entitled “From Delta Blues to Opera News: A Mississippi Musical Exposition” which will be produced in fall 2021.

6:00pm | A Conversation with Lara Downes, Hosted by Lia Uribe

Lara Downes is among the foremost American pianists of her generation, a trailblazer on and off-stage whose musical roadmap seeks inspiration from the legacies of history, family, and collective memory.

Downes’ playing has been called “ravishing” by Fanfare Magazine, "luscious, moody and dreamy” by The New York Times, and "addicting" by The Huffington Post. As a chart-topping recording artist, a powerfully charismatic performer, a curator and taste-maker, Downes is recognized as a cultural visionary on the national arts scene.Lara's forays into the broad landscape of American music have created a series of acclaimed recordings, including America Again, selected by NPR as one of "10 Albums that Saved 2016", and hailed as "a balm for a country riven by disunion" by the Boston Globe. Her recent Sony Classical debut release For Lenny debuted in the Billboard Top 20 and was awarded the 2017 Classical Recording Foundation Award.

Her Sony Masterworks recording Holes in the Sky, a celebration of the contributions of phenomenal women to the past, present and future of American music, was released in March 2019, debuting at the top of the Billboard charts. Her newest release For Love Of You marks her concerto recording debut, and celebrates the 200th birthday of the great pianist and composer Clara Schumann.

Downes’ fierce commitment to arts advocacy, mentorship and education sees her working in support of non-profit organizations including PLAN International, the Sphinx Organization, the Lower Eastside Girls Club, Washington Performing Arts, and NPR’s From The Top, where she appears as a rotating guest host.

In 2020 Downes celebrates the Year Of The Woman with world premieres of newly discovered works by Florence Price and Margaret Bonds, and large-scale commissions from Paola Prestini and Clarice Assad, in collaboration with the Chicago Symphony and the Louisville Orchestra.