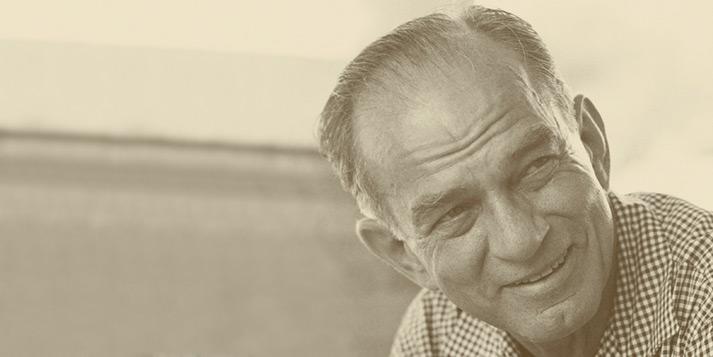 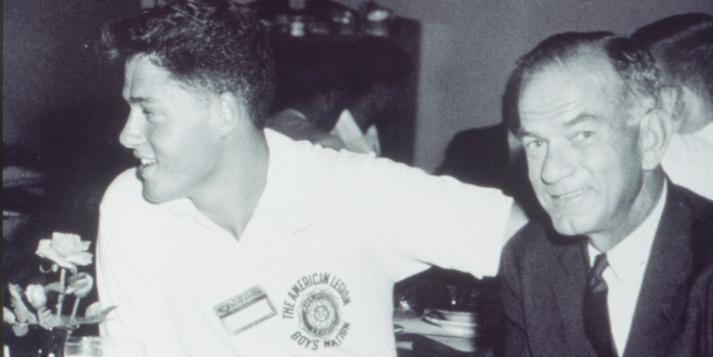 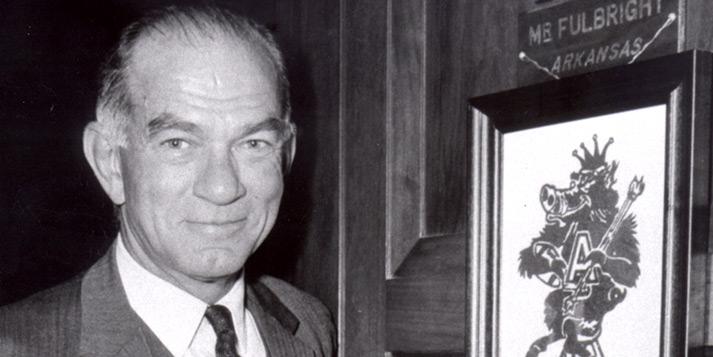 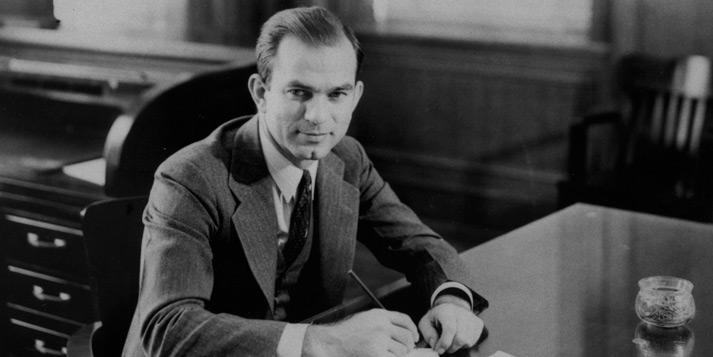 He chaired the Senate Foreign Relations Committee longer than any other Senator in American history.

Fulbright with a young Bill Clinton.

Fulbright showing his love for the Razorbacks on his senate office door.

His career in the Senate lasted 30 years.

J. William Fulbright was a University of Arkansas student who graduated in 1925, was later a law professor and then became U of A president from 1939-41 – all prior to serving as a U.S. Senator for many years and founding the international exchange program that bears his name.

The university recognizes that his legacy is controversial and contradicts his efforts to advance cultural understanding. The university acknowledges and rejects some of his political actions – including signing the Southern Manifesto and opposing the landmark 1954 ruling of Brown v. Board of Education, filibustering the Civil Rights Act of 1964, and voting against the 1965 Voting Rights Act.

J. William Fulbright supported the creation of the United Nations and his efforts to increase mutual understanding between people and nations resulted in the creation of the Fulbright Program – the world’s largest international educational exchange program with more than 370,000 alumni, and thousands of students and scholars from 160 countries participating annually. President Bill Clinton in 1993 honored him with the nation’s highest civilian award, the Medal of Freedom.

Additionally, the college has adopted as its mission the following statement, learning from Fulbright’s conflicting and complex legacy and vowing to do better:

The Fulbright College of Arts and Sciences enriches lives by promoting discovery, diversity, and inclusion, facilitating transformational experiences, and fostering peace through education.

A Senate career that was to be marked by an unwavering dedication to global cooperation began during World War II, years during which U.S. foreign policy was transformed. Americans began moving from a cautious isolationism toward internationalism in world affairs. Acting on his belief that an international peacekeeping organization was crucial in formulating a humane foreign policy, Fulbright sponsored a resolution committing the U.S. to a leadership role in forming the United Nations.

Fulbright was also a dominant intellectual force in Congress. He chaired the Senate Foreign Relations Committee longer than any other Senator in American history. He introduced legislation that led to the founding of the Kennedy Center for the Performing Arts and was the only senator to vote against funding the so-called "Un-American Activities" investigations of Senator Joseph R. McCarthy of Wisconsin.

Fulbright authored several notable books, including The Arrogance of Power, The Crippled Giant and The Price of Empire. Empathy, a theme throughout these three texts and much of his writing, is at the core of the international educational exchange programs named for him.

Fulbright believed that only by understanding our neighbors – whether they are across the street or across the world – will we be able to achieve a world that chooses diplomacy over war.

He also created the prestigious Fulbright Scholar Program. His vision to promote international understanding through the worldwide exchange of university students, teachers, artists, and other professionals was realized in 1946. Today, it is the world’s largest international educational exchange program with more than 370,000 alumni, and thousands of students and scholars from 160 countries participating annually.

The Board of Trustees of the University of Arkansas on November 20, 1981, resolved...

The College of Arts and Sciences at the University of Arkansas, Fayetteville, shall be named, henceforth, the J. WILLIAM FULBRIGHT COLLEGE OF ARTS AND SCIENCES. His name will imbue that college, and the University, with his reputation and image for a devoted interest in higher education and its accomplishments through its scholars as reflected in its students.

To mark the 50th anniversary of the Fulbright Exchange Program, the U.S. Postal Service also issued a special commemorative stamp during a ceremony held February 28, 1996, in Fayetteville.

On October 24, 1999, the University of Arkansas dedicated the Fulbright Peace Fountain in his honor. The fountain, designed by world-renown architect and Arkansan Fay Jones, is dedicated to the possibility of peace through education.

President Clinton said of Fulbright then:

"The best thing America could do was to be an intelligent example of the world through material helpfulness without moral presumption. [Fulbright] said that we should make our own society an example of human happiness, make ourselves the friend of social revolution, and go beyond simple reciprocity in the effort to reconcile hostile worlds. He would far prefer to see us be a sympathetic friend of humanity, rather than its stern and prideful schoolmaster."

It’s J. William Fulbright’s work to enhance cultural understanding, peace, and international exchange through education that we honor, and his service to this institution as president.

How we view past leaders is an important topic and many colleges and communities are grappling with what’s right while working to understand the complete history of those involved and what we can learn from the process.

There is no better place to have this discussion than on a college campus, where we value conversation, learning and debate.