Art Hobson started life in Philadelphia in 1934. His family moved to Manhattan, Kansas, in 1946, where he developed a passion for the trombone and jazz. He received a Bachelor of Music degree from the University of North Texas in Denton in 1955, was drafted and served in U.S. Army bands and the Seventh Army Symphony Orchestra in Europe during 1955–57, and then spent many months in New York City looking for steady employment as a musician.  In 1964 he received his Ph.D. in theoretical physics from Kansas State University and joined the physics faculty at the University of Arkansas in Fayetteville, where he remains. In 1975, Art developed a new kind of physics course for nonscientists, one that connected physics to our society and culture. His textbook, Physics: Concepts and Connections, is an outgrowth of that course. Although he retired in 1999, Art still pedals his bicycle to the university every day and is as over-involved as ever. He and Marie love to travel and often combine business trips to foreign lands with vacations. He loves skiing, the theater, concerts, the beach, reading, writing, and bicycling. Although he’s lost his trombone "chops," he values his arts background, remains an avid lover of jazz, and even pounds out an occasional tune on the piano.

Art is writing a book titled "Tales of the Quantum: unraveling science's most fundamental theory," to be published in 2065 by the Oxford University Press.

The Future of Land-Based Strategic Missiles (an arms control study by a team of physicists, co-authored and co-edited by Art)

Phyiscs: Concepts and Connections (currently in its 5th edition and used on over 100 college campuses)

Over 100 papers on theoretical physics, the control and reduction of nuclear weapons, and physics education.

Awarded Fellow of the American Physical Society in 1992

Co-organizer of the American Association of Physics Teachers' physics and society education group. 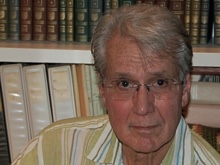