It was September, 1942. There were two new teachers in the three man physics department. One was Harold Clark, fresh from graduate school, and the other was Paul C. Sharrah with his new PhD (August, 1942) from the University of Missouri. Professor L. B. Ham was the relatively new head of physics and he would serve until 1957, when Sharrah would become the first chairman of physics. Physics was in Old Main in 1942 and would be there until 1952.

Those were the WWII years. "All three of us taught a normal load of sixteen hours and taught all of the elementary laboratories also!" he remembers. Suddenly in 1943 Sharrah and his colleagues found themselves teaching young army air corp and army specialized training groups. The teaching load was increased to twenty-three hours. All three in physics were given a fifty percent increase in salary, but it was so hard that it almost cost them their health. About twenty other teachers joined them in teaching physics laboratories and drills associated with these military training courses. An estimated 3,500 men in uniform were taught by the university in that WWII period. The regular University enrollment had fallen approximately 30% to under 2,000.

As the war became more intense and prolonged, there was a great need for scientific and technical personnel to help the war efforts. Sharrah went to Washington, D. C. in the spring of 1944 to work at the Naval Ordnance Laboratory on torpedo control systems. He would be there until January, 1946.

The post WWII years brought returning veterans to school. It was a big job and the department was always undermanned. Even with all this teaching, research was not forgotten. Sharrah's two main research accomplishments were both related to the study of liquids. Working first in the summer of 1951 at the metallurgy division and later with the chemistry division of the Oak Ridge National Laboratory, he carried out some interesting studies of molten lead and bismuth alloys using neutron diffraction.

Dr. Sharrah was developing a program with x-rays. With Dr. R. F. Kruh of chemistry he built an AEC sponsored x-ray diffraction facility in physics for the study of liquids. This machine was the center of research performed by several graduate students. This x-ray diffraction machine and a similar unit built in Oak Ridge were the first to make use of a bent and ground crystal focusing monochromator. The idea had come to Sharrah when he was a graduate student at the University of Missouri. This design made it possible to study the diffracted x-rays from the surface of a flat sample, and was especially good for studying liquid metals.

Sharrah seemed to be most in his element when he was teaching! He taught and managed the physical science course for several years. Recognizing early the importance of demonstrations in teaching, he directed the preparation and development of many good demonstrations. He enjoyed teaching the college physics and university physics courses. He introduced the modern physics course for engineers. He enjoyed teaching astronomy and directing the planetarium. The one credit-hour course in the principles of celestial navigation was very popular.

From 1956 until 1971 he taught in the summer institutes for high school teachers and directed several of these. He remembers with special pleasure the institute for high school physics teachers in Gujarat, India. There he gave a demonstration lecture six days a week and made out and administered an objective test once a week based on the material from the PSSC physics text. The high school teachers liked the demonstrations, but one of them objected to the use of so much English!

During his tenure as department chairman, from 1957 to 1969, the atmosphere of growth was evident . The doctoral program in physics was established in 1959. There was an increase in research activity and the number of graduate students and faculty. The faculty size grew from five in 1957 to twelve in 1969. The decade of the peak production of degrees in physics locally was 1960-1969.

He worked with representatives from Oklahoma and Kansas to establish the Arkansas Oklahoma Kansas (AOK) section of the American Association of Physics Teachers. He remembers when the local chapter of Sigma Xi was established and when the physics organizations Sigma Pi Sigma and the Society of Physics Students (SPS) got under way.

To summarize in his own words: "If one could only be a true prophet of the future. Who could have imagined that so much would happen in physics during the last fifty years we are reviewing! It has been a pleasure to see the department develop from a small, rather effective teaching unit, to one where both good teaching and research are evident. Some feel that physicists do not make very good speculative philosophers! At least it can be said that if we teach well, do research well, and build character and integrity in our students, we serve well."

"Best wishes to all our students in all the courses, both past and present!" 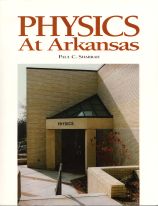 Physics at Arkansas - Paul Sharrah's History of the Physics Department project is complete! Many of you have waited for this book for a long time. Physics at Arkansas is a first hand account of the history of the department. As you read Physics at Arkansas you will see your own experiences and accounts of events reflected in its pages. Prof. Sharrah had seen 50 years of this history unfold in front of his eyes. For six years, he carefully researched all aspects of it. It had been a labor of love for him. He did it out of his love for the department, his colleagues, and students. Shortly after the completion of the book, Prof. Sharrah passed away unexpectedly on Saturday, July 27, 1996. He had a deep and abiding interest in the department. Through his long association and dedicated service to the department he earned our love and respect. We will all miss him.

Viewable excerpts from Physics at Arkansas are available on the Department History page.

As you know the department has established an endowed "Paul C. Sharrah Scholarship Fund" to honor him. The income from this fund will be used to provide $500 scholarships to deserving physics majors. The scholarship will be awarded for the freshman year to attract good students to physics, and will be continued for three additional years subject to satisfactory academic performance. We hope that eventually we will have sufficient funds to be able to award one scholarship each year.

Professor Sharrah has served this department with distinction for over 50 years. During his tenure as the chairman, the Department experienced rapid growth and developed the Ph.D. program. Even now, many years after his formal retirement, he continues to be involved in many of the departmental activities. Students from as far back as the forties remember him fondly. It is indeed fitting to name this scholarship in his honor.

We urge you to contribute generously to this fund. It is a very worthy cause. Please make your checks payable to Paul C. Sharrah Scholarship Fund and mail to Surendra Singh, Department of Physics, University of Arkansas, Fayetteville, AR 72701. Of course, your contribution, as all contributions to the University, is tax deductible.

Your contribution to "Paul C. Sharrah Scholarship Fund " may be mailed to: