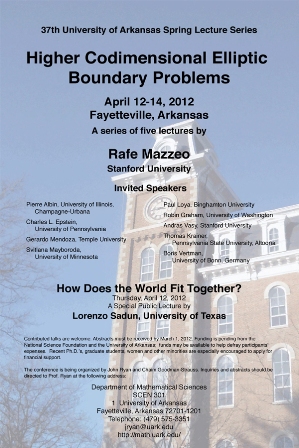 The University of Arkansas Spring Lecture series are conferences organized every spring by the Department of Mathematical Sciences of the University of Arkansas. Each conference is focused on a specific topic chosen among the current leading research areas in Mathematics; a principal lecturer delivers a short, five-lecture course and selects a number of specialists who are invited to give talks on subjects closely related to the topic of the conference. Short talks by young Ph.D.s and finishing graduate students are solicited to complement the conference. Each Lecture Series has grown into an ideal opportunity for specialists and young researchers to meet and exchange ideas about topics at the forefront of modern mathematics.

A PDF version of the collected abstracts is available. [PDF]

Ariel Barton (University of Minnesota)
Title: The Dirichlet problem for certain fourth-order elliptic equations with rough coefficents
Abstract: In 1986, Dahlberg, Kenig and Verchota proved that unique solutions to the Dirichlet problem for the bilaplacian $\Delta^2$, with $L^2$ boundary data, exist in Lipschitz domains. After applying a change of variables, the bilaplacian $\Delta^2$ becomes a fourth-order operator of the form $L^*(a L)$, where $L$ is a second-order divergence-form elliptic operator and $a$ is a scalar-valued function. We construct solutions to the Dirichlet problem for some other operators of the form $L^*(aL)$.

Charles Epstein (University of Pennsylvania)
Title: Stein Filling of 3d-CR Manifolds
Abstract: The problem of when a CR-structure on a compact 3d contact manifold arises as the boundary of a Stein space has been studied since the sixties in several complex variables. The problem gained greater prominence with the recent explosion of interest in symplectic/contact topology. In this lecture we prove that the set of fillable CR-structures on a compact 3d contact manifold is closed in the C^{\infty}-topology. Along the way we visit the worlds of SCV, microlocal analysis, index theory, and Spin_C-manifolds.

Austin Ford (Northwestern University)
Title: A few remarks on wave propagation on singular spaces
Abstract: In this brief talk, I'll discuss some past and current work toward understanding the structural and dispersive properties of the Schrödinger and wave equations on manifolds with conical and other types of singularities.

Robin Graham (University of Washington)
Title: Normal Form for Edge Metrics
Abstract: Edge metrics are a natural class of metrics on the interior of a manifold-with-boundary, where the boundary is the total space of a fibration. Necessary and sufficient geometric conditions will be described to put such an edge metric into a normal form, together with the choices necessary to parametrize all such normal forms for a given edge metric.
This is joint work with Josh Kantor.

Chris Kottke (Brown University)
Title: A uniform resolvent under Witten deformation
Abstract: In 1982 Witten suggested an approach to Morse theory through deformation of the de Rham complex and spectral analysis of the resulting Laplacian. I will describe the construction of a uniform resolvent for such a deformed Laplacian which includes the case of Morse-Bott functions (having critical submanifolds instead of isolated critical points) and so-called "generalized Morse functions'' (which allow for degenerate critical points of "birth-death'' type and which arise when considering families of Morse functions). Our method produces a detailed picture of the spectral asymptotics of the Witten Laplacian and our framework should extend to other interesting situations, such as simple stratified spaces and group actions. This is joint work with Pierre Albin and Rafe Mazzeo.

Thomas Krainer (Pennsylvania State University, Altoona)
Title: Resolvents of elliptic operators on manifolds with wedge singulari
Abstract: I am reporting on recent results about the existence and structure of resolvents of elliptic operators on manifolds with wedge singularities. Such manifolds are modeled by a compact manifold with boundary, where the boundary has the structure of a fibre bundle of closed manifolds, and the manifold is equipped with an incomplete edge metric. I plan to discuss conditions that guarantee the existence of full asymptotic expansions of the trace of the resolvent as the spectral parameter tends to infinity in a ray or sector of the complex plane.
This is joint work with Juan Gil and Gerardo Mendoza.

Paul Loya (Binghamton University)
Title: The zeta function, Casimir effect, and analytic surgery
Abstract: Quantum mechanics implies that a vacuum is in fact not empty, but is alive with virtual particles. One curious side effect is the Casimir effect, which states that two flat metal plates attract each other if they are close enough. Hendrik Casimir published this surprising result in 1948 using a type of "analytic surgery'' for manifolds with corners. The purpose of my talk is to explain Casimir's argument, and show how a general framework can be set up to prove Casimir's result using zeta functions on manifolds with corners.

Svitlana Mayboroda (University of Minnesota)
Title: Singular integrals, perturbation problems, boundary regularity, and harmonic measure for elliptic PDEs in rough media
Abstract: Elliptic boundary value problems are well-understood in the case when the boundary, the data, and the coefficients exhibit smoothness. However, perfectly uniform smooth systems do not exist in nature, and every real object inadvertently possesses irregularities (a sharp edge of the boundary, an abrupt change of the medium, a defect of the construction).

Rafe Mazzeo (Stanford University)
Title: Higher Codimensional Elliptic Boundary Problems (Lecture 1)
Abstract: The who, what and why of analysis on singular spaces. This will be a general lecture describing some ways in which singular spaces appear in various parts of mathematics, the types of geometric and analytic problems that one might wish to study on them & then surveying various results, new and old, some of which will be described in greater detail in later lectures.

Rafe Mazzeo (Stanford University)
Title: Higher Codimensional Elliptic Boundary Problems (Lecture 2)
Abstract: Cones, edges and higher stratified spaces. A particularly detailed geometric and analytic theory is now available for the class of stratified spaces with iterated edge metrics. I will warm up to this gradually by first discussing some classical results about properties of natural elliptic operators on spaces with isolated conic points and simple edges. I will then introduce the general class of stratified spaces and discuss some natural types of metrics on these, with examples, and conclude with a description of some recent results concerning the signature theorem on such spaces.

Rafe Mazzeo (Stanford University)
Title: Higher Codimensional Elliptic Boundary Problems, Geometric moduli spaces (Lecture 4)
Abstract: Many good examples of singular spaces arise as compactifications of moduli spaces of geometric data. Rather than attempting a general survey, I will focus on the structure of the Riemann moduli space with its Weil-Peterson metric and some new work with Ji, M\"uller and Vasy which begins a program of studying spectral geometry on this space. If time permits, I will also discuss some results and conjectures about the Hodge cohomology of monopole moduli spaces.

Rafe Mazzeo (Stanford University)
Title: Higher Codimensional Elliptic Boundary Problems, Some nonlinear problems in geometric analysis (Lecture 5)
Abstract: This final lecture will concern two recent nonlinear results. The first is an extension of the Yamabe problem to stratified spaces and the second concerns the use of K\"ahler-Einstein metrics with edge singularities in the uniformization theory of higher dimensional K\"abler manifolds.

Gerardo Mendoza (Temple University)
Title: Traces and boundary value problems for elliptic wedge operators
Abstract: A wedge operator is a differential operator $A$ on a manifold $\mathcal M$ with boundary that has the general structure one obtains by writing a regular differential operator in cylindrical coordinates. In Mazzeo's terminology, $A=x^{-m}P$ where $P$ is an edge differential operator of order $m$; $x$ is a defining function for the boundary of $\mathcal M$, and there is some additional structure of $\mathcal M$ along its boundary. Ellipticity of $A$ (as a wedge operator) is $e$-ellipticity of $P$. There are other symbols associated with $A$ in addition to the $e$ symbol of $x^m A$. After a review of background material, I will show how to associate to $A$, under very mild hypotheses, a smooth vector bundle over the boundary that classically corresponds to the vector bundle of which traces at $\partial \mathcal M$ are sections. I will then describe what a boundary problem is.
This is part of work in progress with T. Krainer.

Andrew Morris (University of Arkansas)
Title: A local T(b) theorem for square functions on ADR sets of arbitrary codimension
Abstract: We prove a local T(b) theorem for square function estimates associated with integral operators on Ahlfors-David regular sets of arbitrary codimension. This allows us to prove that such estimates are stable under the so-called big pieces functor, and as such, is a means of investigating square function estimates on uniformly rectifiable sets.
This is joint work with Steve Hofmann, Dorina Mitrea, and Marius Mitrea.

Andras Vasy (Stanford University)
Title: Scattering on hyperbolic and Lorentzian spaces
Abstract: In this talk I describe a new approach to analysis on (Riemannian) asymptotically hyperbolic (AH) spaces and certain Lorentzian spaces. This approach connects AH spaces via an extension across the boundary to Although the problems to be analyzed are no longer elliptic, we now have microlocal tools to handle such problems in a Fredholm framework, stable under perturbations. This talk will emphasize the geometric aspects of the connections between these spaces, briefly touching on the underlying analysis. Similar tools are also applicable to analysis on black hole backgrounds.

Lorenzo Sadun (University of Texas)
"How does this world fit together? Hierarchy, tillings, and structure"
SLS 2012 - 08